Rebooting the Principles of Digital Development

The Principles for Digital Development were written in 2012 by a group of international donors and multilateral organisations. They are a great point of reference to guide practitioners applying digital technologies to development programs. In 2015 USAID led a successful process to recruit 50 other agencies to sign-up the Principles including the World Bank and DFID. Who could be against the good advice provided by the Principles (below), which include Use Open Standards and Open Source Software; Reuse and Improve; Address Privacy and Security; Design With The User and Be Collaborative? I support these principles whole-heartedly.

However, they are not perfect and in my opinion need a software refresh and a system reboot. In this blog I argue that the Principles are blind to gender, race and disability, out of date, and in several respects they have failed to live up to their own principles. I want to provoke a discussion about how the Principles for Digital Development might be continually improved and become genuinely open, collaborative and participatory.

The Aims
The Principles for Digital Development website states that the Principles are not meant to be stagnant but rather a form of "living guidance" able to change over time in order to remain relevant and useful. The first Principle is to “design with the user” and the last is to “be collaborative”. It is a “core tenet” of the Principles to be “incremental and iterative” and to “ensure that the design is sensitive to and considers the needs of the "traditionally underserved”. These principles could, and arguably should, have been applied to the development and curation of The Principles of Digital Development themselves.

The Reality
The Principles themselves were not designed with users in a collaborative way that was inclusive of the traditionally underserved. The Principles were designed by some of the most powerful agencies and donors. Other actors were then asked post-facto to sign up to them without gaining any control or power to change them. This runs contrary to principles of participatory methods and leaves signatories on the mid-to-lower rungs of Arnstein’s ladder of participation. Since they were written, the Principles have, to my knowledge, been stagnant and fixed. They have remained unresponsive to the constructive criticism offered to improve them, including the failure to address, or even mention, gender or other key dimensions of (dis)advantage or (under)privilegee. 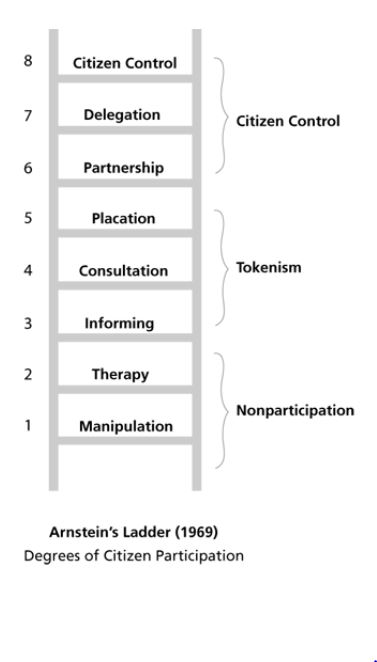 The Result
Partly as a result of not designing with users from what they refer to as 'traditionally underserved' communities the Principles are genderblind and raceblind. The thing that research has taught us most clearly is that technology is never neutral and it invariably reflects the perspective of its designers. In addition the failure up until this point to make the Principles an open, living document, revised in an iterative and adaptive way, has meant that lessons learnt, new research, and constructive criticism have yet to be incorporated. The Principles fail to reflect the now well-known danger that the uncritical use of digital technologies repeatedly reflects, reproduces and amplifies existing inequalities along familiar intersecting dimensions of disadvantage including gender, race, caste/class and disability. As renowned scholars Ruha Benjamin, Cathy O'Neil and Virginia Eubanks have shown, when technology developers do not attend to the inequality already embedded in data and digital technologies the design process risks automating and amplifying existing social inequality and injustice.

The Way Forward?
Would it be possible to have a process for curating the Principles that enabled them to be genuinely embrace iterative change and to be designed with users? Could 'traditionally underserved' users lead that process and have the power to ensure that a revised set of Principles foreground the interests of women, disabled people, and other marginalised groups in the global south to ensure that they are not left behind? Iterative revision in an open process would also allow lessons learnt and new research to be reflected in The Principles.

For example recent research has taught us that it is not always appropriate to 'Design for Scale'. When the objective is to 'leave no one behind' a centralised one-size-fits-all approach rolled out universally risks ignoring the needs of the most marginalised and those with complex needs. Instead bespoke, contextually-sensitive approaches are more appropriate.

It can also be problematic to "Be Data-Driven". It may sometimes be more appropriate to be value-driven. Research is repeatedly showing us that data is systematically and structurally biased along lines of gender, race and class. As a result decisions based on that data often reflect, reproduce and amplify existing prejudice and inequalities. These are points which I previously summarised in the Ten Rules of Technology. Being data-driven can also be reductive and dehumanise decision-making that would benefit from being more human-centred. People are more than data-points. I would argue that we have good reason to resist the drive to reduce humanitarian and development processes to automated data-driven and algorithmic decision-making and may well be counter-productive to the principles of human-centred development.

If we are honest about The Principles for Digital Development, up to this point, they have not fully lived up to their own principles or core concepts. We could usefully reflect on what is it that has made them resistant to change despite constructive criticism. I would strongly argue that we do not need the most powerful actors in international development to control any revision of the Principles. Instead I would argue that they should be revised periodically by civil society organisations in the global South that were not central to the initial process. Civil society networks like the APC or CIVICUS would be best-placed to facilitate such a process. In an age of adaptive and agile management it should be possible to embrace iterative design and open innovation process and to otherwise apply the Principles to The Principles themselves.