This month I have been in the Philippines researching participatory technology initiatives designed to include Filipino citizens in participatory governance programmes.

Perversely I came back more concerned about the ways that digital technologies exclude the most marginalised. In this post I explain the reasons why.

The research that I am working on examines the use of digital technologies by Filipinos to improve transparency and accountability - including the use of ‘citizen engagement technologies’. Formerly the text messaging capital of the world the Philippines has now become the social media capital of the world. It's a particularly interesting place to study citizen engagement technologies not least because of the role played by ‘Generation Txt’ in mobilising political opposition to the corrupt rule of President Estrada during the People’s Power II uprisings. When Estrada was peacefully overthrown he blamed "the text messaging generation" for his demise.

This research will consume most of my time over the next three months and is funded by a grant from Making All Voices Count. It seeks to understand why some people use technology to actively engage with government and why others don’t. Making All Voices Count has funded 14 innovation and scaling projects in the Philippines that involve the use of digital technologies to promote transparency and accountability like this disaster information project and this participatory budgeting initiative. Many of these projects involve the use of mobile technologies to engage citizens in aspects of participatory governance including holding elected officials and corporations to account. Examples include the local government participatory budgeting programme Bottom-Up Budgeting, the open school data project Check My School, and the extractive industries transparency initiatives of Bantay Kita.

Although much of this work is genuinely innovative and ground-breaking, so far it has only been able to reach a small fraction of the population. An unconventional aspect of our research was that we chose to focus on non-users in order to understand more about why the majority of the population do not use these transparency and accountability technologies. Of course non-use is partly explained by the fact that much of this work is in its early phases and has not yet accessed funds for national scale-up, but we wanted to assess whether there were any structural obstacles to access.

During our fieldwork in the Philippines we met with technology developers, funders, academics and government officials in Manila but we spent the majority of our time on the island of Palawan. There we held discussions with NGO groups working on mining and extraction issues, a Batak indigenous peoples’ group living outside the power and water grid, and a range of civil society organisations working on environmental, education and democracy issues.

Despite the genuinely impressive range of technology for transparency and accountability initiatives being piloted in the Philippines, what became very clear in our interviews and focus groups was that use of digital technology was itself a cause of exclusion. The technology that was being introduced in order to include citizens was in many cases itself the cause of marginalisation. As we examined the factors more closely we found it useful to understand them in reference to the five ‘A’s of digital access: availability, affordability, awareness, abilty and accessibility. Readers of this blog will remember that I have previously written about the five 'A's here and as long ago as 2010 here.

The visit to the indigenous Batak community highlighted one of many examples of Filipinos for whom the internet and data connectivity are simply not available. The Philippines is made up of 7,000 islands and internet connectivity and cellular coverage are not available in some places. These digitally excluded groups are often already marginalised by their rural location and by relatively low levels of income and education. For such groups the advent of the information society can act to magnify existing exclusion and marginalisation in relation to affluent urbanites.

Even for those to whom internet and cellular coverage is available there is a sub-set for whom it is not practically affordable. The Philippines has the slowest and the most expensive internet connectivity in Asia, with artificially high prices due to a duopoly of providers. For many Filipinos on low incomes connectivity is out of reach. Affordability is not a binary issue; a person may have a limited amount of cellular credit, but this may be insufficient to spend on open data websites or citizen engagement platforms. A person is able to afford to engage only to the extent that they have disposal income to dedicate to owning digital technologies and financing connectivity.

Even for those to whom the internet is available and affordable, a lack of awareness often explains non-use. We found that even for the most well-established and successful citizen engagement technologies levels of public awareness were low. There were low levels of awareness among tech-savvy urbanites, and outside the metropolitan centres these levels dropped even further. This is not a criticism of the initiatives themselves: they have not had marketing budgets to raise awareness. It does however raise questions about whether funders are prepared to invest in civic engagement and awareness raising beyond eye-catching pilot phases.

Even where awareness levels are high a person’s ability to make effective use of technology may be limited by a lack of skills or knowledge. Insufficient time and resources for user training and capacity building are a feature of many technology for development programmes. The skills required for citizens to meaningfully participate in governance are regularly a combination of both technical skills as well as the knowledge necessary to negotiate local social and political realities. If we are to avoid further disadvantaging those already marginalised by low levels of education and technology access, then our digital development initiatives need to invest in building the necessary technical and political capacity of citizens to effectively hold office bearers accountable.

In the Philippines, as in other countries, 10% of the population are disabled. Disabled people living on low incomes are among the most marginalised in society. If we design technologies that are inaccessible to people who are blind or visually impaired (for example) we risk adding yet another layer of relative disadvantage. More positively, digital technologies can be used to advantage people with disabilities by providing adaptive technologies enabling their employment, enriching their leisure and facilitating their social engagement - but doing so requires conscious effort to include their participation and priorities.

It is possible to see the five ‘A’s of digital access as a series of concentric circles that structurally exclude particular groups whenever digital technologies are deployed. Analysing digital access in this way helps to make apparent the range of mechanisms that can systematically exclude already marginalised groups from participating in the information society. 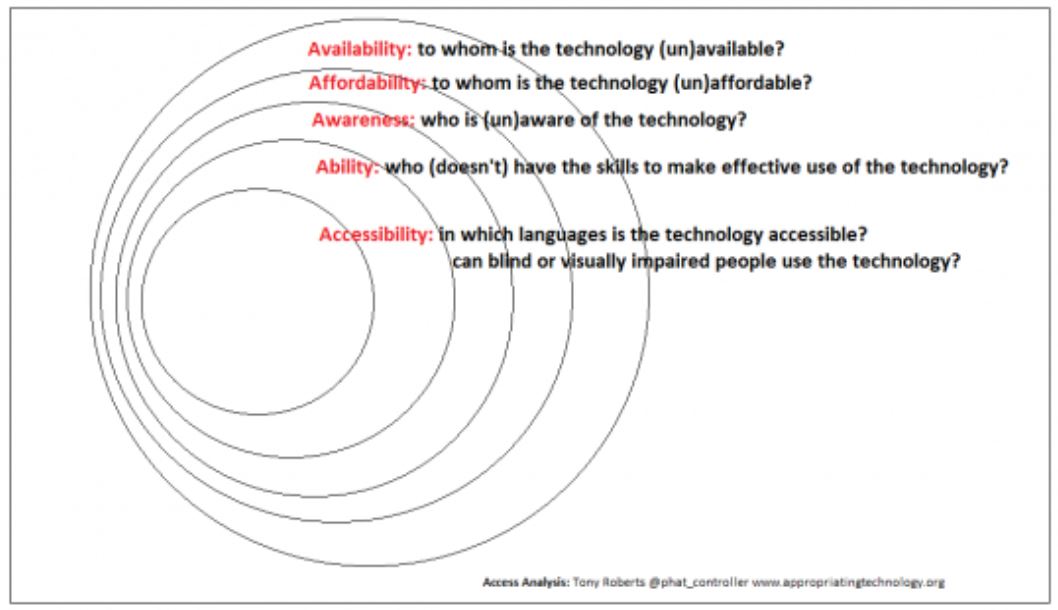 A more positive way of approaching this would be to see the five ‘A’s of digital access as five dimensions that designers of digital development projects can use to think through exactly who their initiatives are intended to benefit.

I remain optimistic about the potential for using digital technologies in social justice and human development. We found initiatives in Philippines that genuinely inspire optimism, but we also need to be mindful of the potential for technology to exclude the most marginalised.

There are always imaginative ways to secure the participation of marginalised groups, including blending offline and online activities and using analogue as well as digital technologies. The main take-away from the research so far has been underscoring the lesson that if we intend digital development initiatives to include the most marginalised, then we need to design for equity from the outset.

This research is still in its early stages so please get in touch to correct me where I am wrong, and feel free to point me towards ‘alternative facts’ as appropriate.