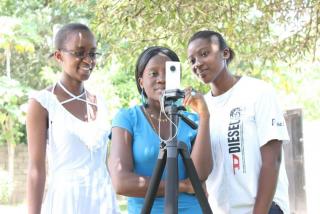 I thought I had died and gone to PV heaven ...

At the launch of the Better PV Practice series I had the opportunity to share share experience with a host of real-life PV Gurus including Jackie Shaw and Clive Robertson from Real Time Video, Nick Lunch and Gareth Benest from InsightShare, Julia & Rick Goldsmith from Catcher Media, Christoph Warrack from OpenCinema and the event host from the Open University, Chris High.

As a rookie PV practitioner, I confess that I was a little star-struck! After all they had accumulated decades of experience using video for social change, and between them they had written some of the founding texts of PV. Jackie and Clive wrote the original 1997 how-to nguide on Participatory Video, a decade later Nick and Chris Lunch produced an updated free and open-source handbook, and Gareth added the rights-based toolkit for PV in 2010.

And as if that was not enough expertise, we then had the benefit of the combined experience of another 90 PV practitioners from 20 different countries as they logged from around the world to join the largest ever on-line 'Web Gathering' of participatory video practitioners, experts and enthusiasts.

At this launch event I especially enjoyed the debate with Jackie Shaw and Nick Lunch about how we can avoid participatory video being co-opted and watered-down. We discussed how we might act in order to retain (or regain) the original emancipatory intent so evident in their founding texts on PV. I know from my own experience of running two 'development' organisations how easy it is for an emancipatory founding vision to become diluted by daily pragmatics and funding realities. It would be a terrible shame if PV ended up as PR – merely providing window-dressing videos for development initiatives that leave the status-quo' intact. I'm personally grateful to Jackie, Nick and their colleagues for the inspiring Freirian ethic that they put at the heart of their guide-books and at the heart of their PV practice, and I fervently hope that the “Better PV Practice” series will serve to re-emphasise that critical intent and radical purpose of participatory video.

This excellent first event was just the curtain-raising launch for an even more impressive new series of PV web-gatherings that are free and open to anyone interested in ”Better PV Practice”. The next event, on July 16th takes the form of a 'virtual field-visit' to India to exchange learning with some of the most exciting participatory video practitioners in the world. The final list of presenters has not yet been announced but will be published in the next few days. Then the 'virtual field-trip' to India will be followed up with virtual field-trips to Nepal and other sites of PV best practice.

This innovative and ambitious series of on-line events will bring together over 500 PV practitioners, academics and enthusiasts from 50 different countries with the shared aim of helping each other achieve “Better PV Practice”. The events are all free and open to anyone.